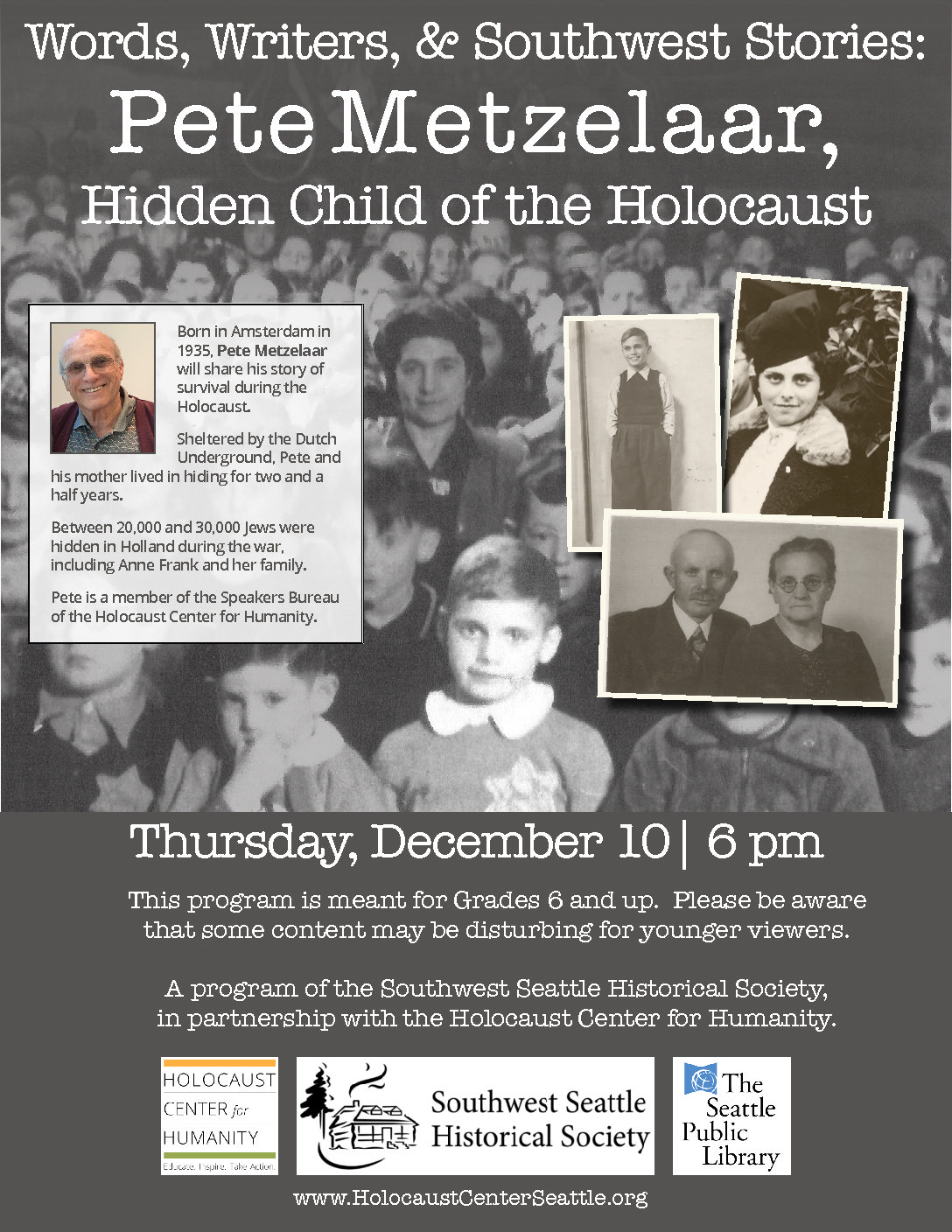 ‘Words, Writers & SouthWest Stories,’ a historically-based speaker series of the Southwest Seattle Historical Society, is honored to host Peter Metzelaar for a live Zoom presentation on Thursday, December 10 at 6:00 PM. Metzelaar will deliver a presentation entitled, “Hidden Child of the Holocaust.” Registration is required.

Born in Amsterdam in 1935, Metzelaar will share his story of survival during the Holocaust. In 1942, when he was 7, the Nazis seized Peter’s entire family except for Peter and his mother. Metzelaar’s mother contacted the Dutch Underground for help. The Underground found Klaas and Roefina Post who agreed to shelter Peter and his mother on their small farm in northern Holland, putting their own lives at risk. For two years they lived with the Posts, until it became too dangerous and they found another hiding place with two women in The Hague. Peter, his mother, and his aunt were the only survivors of his family. Klaas and Roefina Post have been recognized as Righteous Among the Nations by Yad Vashem.

After the war, Peter and his mother immigrated to the United States in 1949, arriving in New York.  Peter was 13 and didn’t speak any English, but was placed in the 8th grade. Peter had a long career as a radiology technologist. He and his wife Bea raised two children from Pete’s previous marriage and had a third son in California. The Metzelaars moved to Seattle in 1997. Peter continues to be an active member of the Holocaust Center for Humanity’s Speakers Bureau.

This presentation is meant for audiences Grades 6 and above. Please be aware that some content may be disturbing for younger viewers.

Registration is required. Registered participants will be emailed a link to the presentation on the date of the event. Please register for this event by filling out the form below:

This presentation is a program of the Southwest Seattle Historical Society, in partnership with the Holocaust Center for Humanity and the Seattle Public Library. This program is also made possible by the support of our sponsors 4Culture and Luna Park Cafe.

August 12 Words, Writers, and Southwest Stories: The River That Made Seattle

July 10 at 1 PM: Listen to the Trees Book Reading and Signing with Sean Petrie

Let’s Go To Luna Park: An Interview and Film Screening with Paul Moyes

From Stonewall to Seattle: The History of Pride on the Duwamish Peninsula and Beyond

We are open again. Friday - Sunday, Noon to 4pm. Face coverings are still required regardless of vaccination status.